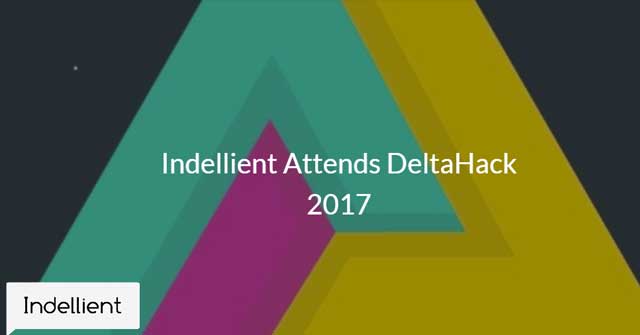 To sleep or not to sleep? That was the question on every Programmer’s mind at the annual Hackathon event held by McMaster University.

On January 28-29, a few Indellient team members shared their insight and experiences as we served as sponsors, mentors and panelists for McMaster University‘s student hackathon for positive change. The intensive 24 hour marathon led by DeltaHacks is in its second year and set the stage for students to create “the next big thing” in tech. The event brought together 500 students from across Ontario, from beginners to experienced veterans, to share their love for all things programming and to create positive change that aligns with their passions – be it the environment, health, inequality or education.

The goal behind this hackathon was to encourage individuals from different backgrounds to collaborate, create and bring ideas to life. Engineering and computer science students especially can gain a new perspective, hone their skills and grow their capabilities.

Wide-eyed and bright students came together to battle it out with one rule in mind: the hack you submit must have been made during the 24 hours of this event.

The two-day hackathon consisted of teams occupying classrooms, random hallways and desks – or any other spot they could find – to begin programming. Commencing shortly after noon on Saturday, teams of four had 24 hours to create a prototype using certain guidelines set by the hackathon organizers or sponsors. Teams used software, hardware and sometimes both to bring ideas to fruition in time for Sunday’s expo and judging sessions.

In addition to this, DeltaHacks held educational and recreational events throughout the day to keep the participants energized, including networking panels and talks from major software companies on various topics including Intro to Python, Mobile Development, Intro to Optimization and more.

It was crunch-time for the participants who would have to prioritize their time and make sure they had enough time to create a prototype, whilst soaking up the valuable knowledge being thrown at them.

As well as supporting the cause, our team hosted a Career panel titled “Hacks For Your Career” so students could ask our leaders any questions that came to mind, including their thoughts on career development, recruiting and software technologies used within the industry – and offered guidance on whatever technical skills their project required.

Our mentors were present throughout the hackathon to provide assistance and workshops to teach students coding language that they can apply to their projects. As sponsors, we were also another support system for the teams, and participated in a Slack channel to help solve any ongoing problems they were facing.

“I took away an immense amount from the event. First of which was being reminded that there is an insane amount of things you can do with technology,” said Kulwinder Billen, Software Developer at Indellient who attended DeltaHacks. “It truly humbled me knowing that it would be very unlikely for me to understand all the diverse types of technologies used to create these prototypes. However, it was also an inspiration as it ignited ideas that I might one day want to work on.”

Billen, who is a graduate of McMaster, returned to his alma matter after learning about the opportunity from fellow McMaster grad and intern at Indellient Zichen Jiang, who is heavily involved in the DeltaHacks community. “Though I didn’t get involved while I was a student, I’m glad I had the opportunity to participate after joining Indellient.”

“I feel a sense of accomplishment by being involved in DeltaHacks. As an organizer, it comes from the tired but proud faces of the attendees as they showcase their products. As a mentor, I am happy to help the students in any way I can to achieve their goal. And as a sponsor representative, I am proud that the company I work for is able to sponsor such events and help students polish and show off their skills,” says Jiang about his 3-year involvement in the initiative.

All in all, events like DeltaHacks are extremely important to shape young minds and build their self-esteem, especially for those first-timers that are starting to develop software applications. Another reason why hundreds flock to this event is because of the short turnaround to receive feedback. Within 24 hours you are judged for your skills, and can allow you to quickly benchmark the quality of your work.

DeltaHacks and similar university-run Hackathon events give you access to a community of developers who might one day be mentors, colleagues, or business partners, and can even lead to career opportunities. Our team returned to their desks on Monday morning feeling motivated, encouraged and full of pride after being involved with such great students, community members and project topics.

DeltaHacks is organized by PhaseOne, which is a club for students interested in learning, building and experimenting with different computer and coding languages.